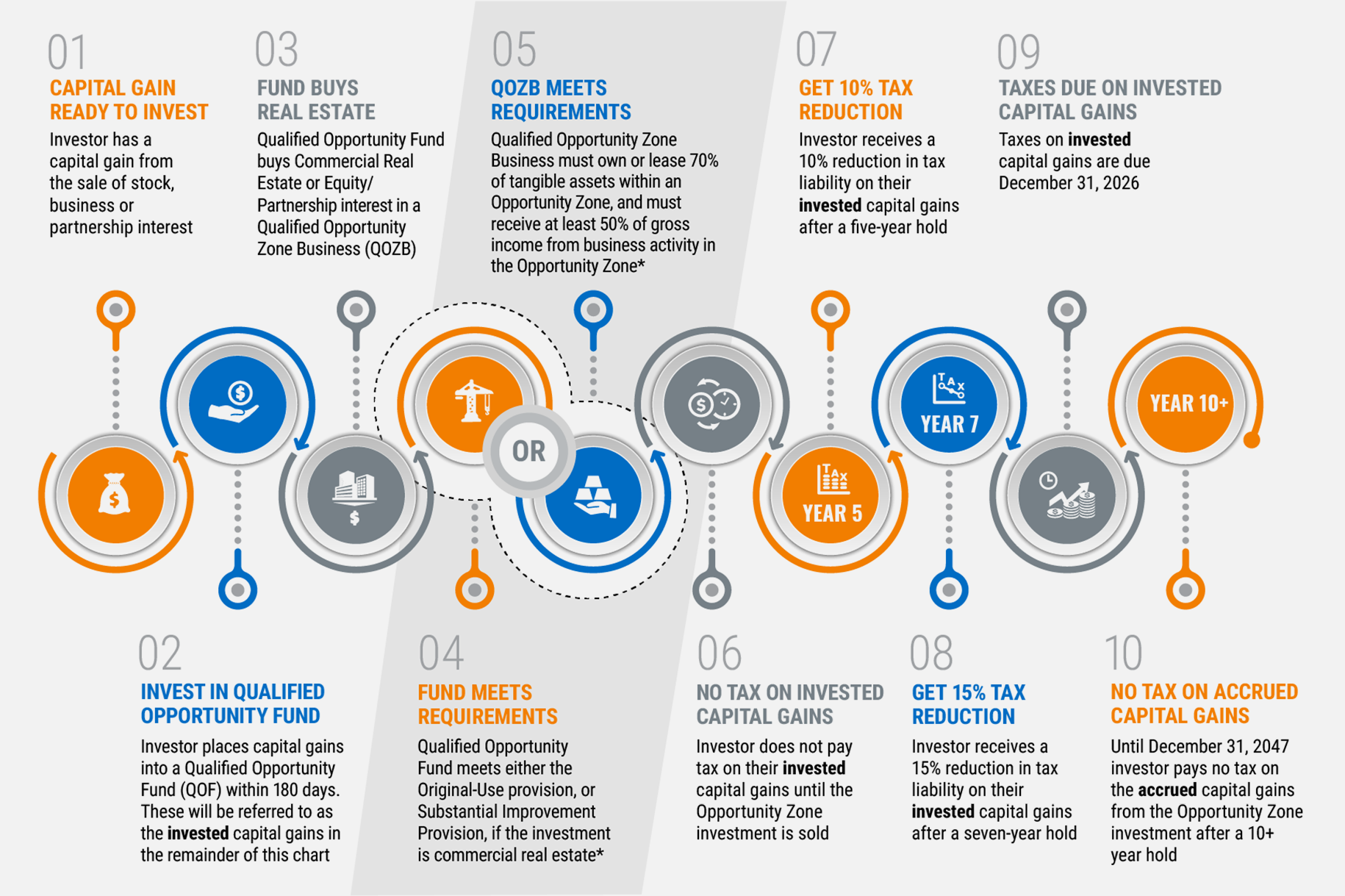 In response to the impending deadline, an estimated $20+ billion is currently being raised by funds nationally, for the purpose of investing in Opportunity Zone product. Groups range from traditional institutional investors such as Normandy Real Estate Partners and RXR Realty, to specialty investment managers and private equity such as EJF Capital and Virtua Partners. The amount of investment volume recorded in areas now designated as Opportunity Zones has expanded considerably this cycle, even before the Opportunity Zone legislation was created, in response to compressing yields in coastal gateway markets. In this lower-yield environment, investors have had to chase yield into emerging neighborhoods on the perimeter of large gateway markets, or into smaller non-gateway markets. Similarly, groups have begun to focus on opportunistic and value-add fund strategies to meet return targets and satisfy their investors. In 2018, the sales volume in Opportunity Zones nationally reached a peak of $60 billion, a 94% increase from just five years earlier. The majority of this volume, or 65%, occurred within non-gateway cities.

The favored product for Opportunity Zone investors is unused or underdeveloped land, vacant buildings, and low-quality Class C commercial and multifamily properties. Investment in these types of product is consistent with the requirements of the legislation, and also many funds’ preferences for opportunistic and value-add strategies. One example of such Opportunity Zone investments is the planned redevelopment of a former enamel product factory site in Southeast Baltimore. While local developer MCB Real Estate bought the 20-acre PEMCO site in 2014 before the legislation was passed, it has recently brought on Prudential, which has created a Qualified Opportunity Fund (QOF). That fund will invest $150 million in the development of 100,000 square feet of office, more than 80,000 square feet of retail, and more than 300,000 square feet of multifamily in two build phases. The rebranded Yard 56 will include credit retail tenants such as LA Fitness and Chipotle and is anticipated to become a viable work-play-live district. The Opportunity Zone legislation will help improve the after-tax IRR of the project and help offset the costs involved with demolishing the site and complying with a mandated environmental cleanup. Another example of an Opportunity Zone transaction is Virtua Partners’ purchase of a 3.6-acre plot of land in Tempe, Arizona, where the firm will build a 90-unit multifamily property with an affordable component. Also notable: the crowdfunding platform Fundrise’s purchase of a long-vacant mixed retail-residential property in the LeDroit Park neighborhood of Washington, DC.

Seattle has been one of the top performing markets in the US in terms of investment sales volume, with volume increasing by nearly 70% in the last five years, to $17 billion. While sales volume in the areas now designated as Opportunity Zones has only accounted for a little more than 8% of the total volume, there is more than 3,600 acres of developable land and more than 3,800 Class C properties that could be used for future Opportunity Zone development in the Seattle metro area. According to Smart Growth America, an urban planning non-profit organization, Seattle tied for first in the “growth potential category” (along with cities such as Oakland, Portland and Baltimore), with downtown Seattle being cited as the most promising market. One Opportunity Zone in particular that is poised for growth is located in Pioneer Square, a submarket bordering Seattle’s burgeoning Central Business District. Already experiencing tremendous demand, with five office projects either under construction or delivered since the third quarter of 2017 – and an office vacancy rate of just 3.3% – Pioneer Square is poised to attract further attention and investment with the added benefits of the Opportunity Zone legislation. Additionally, one of the Seattle metro’s commercial real estate firms, the SMARTCAP Group, has launched its first Opportunity Zone Fund that will focus on local investments. Unlike most funds, it has been able to source its capital almost exclusively from investors employed in the technology sector, who have significant portions of their net worth tied up in stocks – and consequently, who would greatly benefit from capital gains tax deferment and reduction via the Opportunity Zone program.

What Are the Implications for Our Clients?

Despite the delayed release of additional guidance from the IRS, investors remain undeterred and are beginning to close on some of the first Opportunity Zone investment transactions. In fact, funds have found that raising capital for investments that are marketed as Opportunity Zone transactions can be easier and quicker, aided by a wider pool of potential investors, capital, and publicity. They have also discovered that many local community governments have been accommodating of permitting and zoning for Opportunity Zone projects, particularly for sites that the private sector would not develop under normal circumstances. Additionally, the type of product being developed typically achieves higher yields for funds while satisfying the goal of the legislation, which is to uplift impoverished areas by developing commercial spaces that encourage job growth and economic activity. This kind of social impact is increasingly being targeted by institutional investors and funds, which exclusively select investments that will create positive measurable social or environmental change, while avoiding all “sin” investments that have proven negative impacts on society. There is some skepticism surrounding the Opportunity Zone program on the grounds that it may yield more tax benefits for investors than economic benefits for areas in need. However, the program thus far appears to be generating considerable investor interest, a necessary condition for achieving its policy objectives.