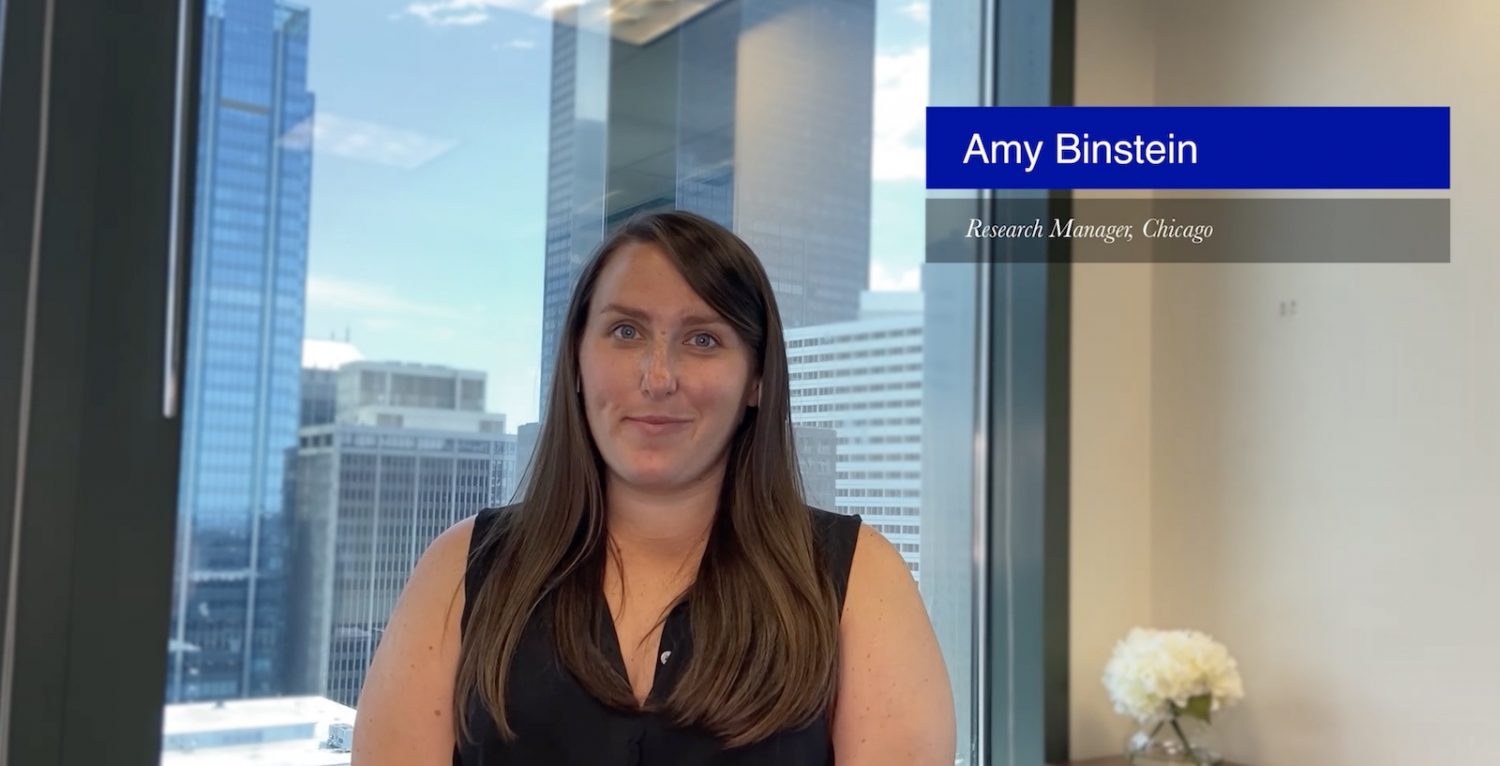 The National Trend: Material Prices are Raising the Cost of Construction

The COVID-19 pandemic has thrown a variety of obstacles at the commercial real estate industry; some product types are experiencing record activity while others are coming out of a challenging slowdown. One hurdle all asset types are grappling with is rising construction costs. A combination of raw material shortages, lack of skilled labor and supply chain issues has contributed to the recent run-up in pricing—particularly for raw materials.

The current material shortage began at the start of the pandemic as factories worldwide halted production amid fears of a prolonged economic downturn. Yet, demand for residential real estate and certain segments of the commercial markets flourished throughout much of the pandemic. This robust demand, combined with supply chain disruptions, natural disasters and labor shortages, caused the recent pricing surge. While steel and timber pricing have made headlines, PVC pipe, plumbing supplies, computer chips, paint and packaging are all contending with steeper costs. The adjacent figure highlights the Bureau of Labor Statistics’ (BLS) Producer Price Index for construction materials, which reached a historic high in April 2021. Over the past year, this index increased by 23.8% on a nonseasonally-adjusted basis, representing the largest annual increase since BLS began tracking the statistic in 1947. 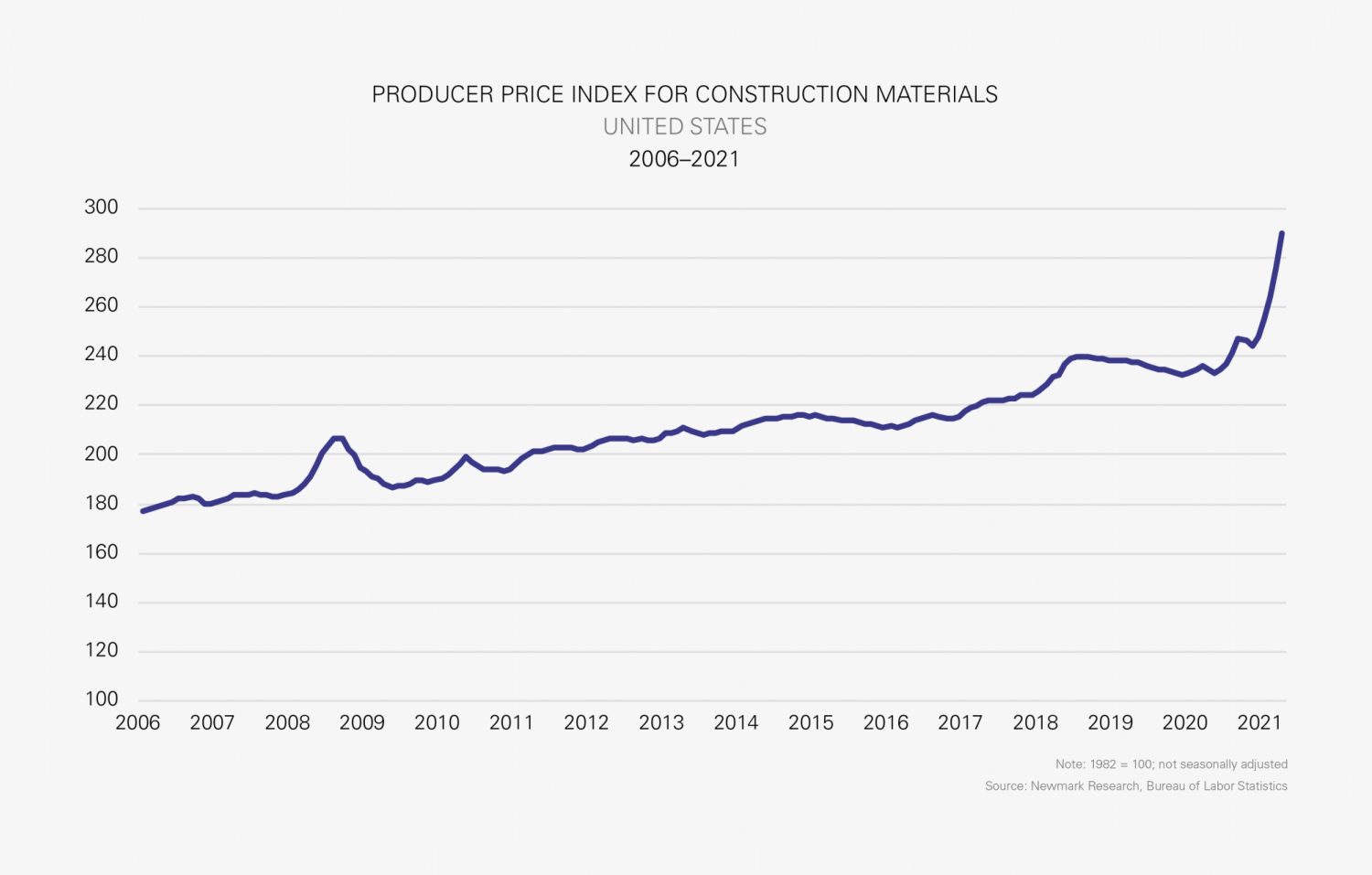 Digging deeper, lumber and steel are two commodities facing steep upward pressure on pricing, which is particularly concerning for industrial development. Increased demand for warehouse/distribution space throughout the U.S. is driving developers to bring record levels of new product online, with a particular focus on major logistics hubs such as Dallas-Fort Worth, Chicago, Atlanta and the Inland Empire in Southern California. Consequently, steel prices have skyrocketed by approximately 160% since last August. Tariffs were already affecting lumber prices prior to the pandemic. However, a lack of production during the virus outbreak and heightened demand in the single-family housing market drove the cost of lumber to almost 320% above March 2020 levels. The National Association of Home Builders reported pricing for single-family homes increased by an average of $35,000 as a result. The scarcity of skilled labor has been an ongoing narrative in the U.S., with the National Association of Home Builders reporting a shortage of 344,000 positions across the entire construction industry. This has led to increasing wages for construction workers; hourly wages for building construction professionals reached $34.97 in April 2021, representing a 3.0% increase since the beginning of the pandemic.

In Chicago, industrial warehouses remain the most in-demand new construction product. The market has experienced recordbreaking amounts of deliveries over the past decade, with 131.2 million square feet being completed and 30 consecutive quarters of more than 1 million square feet delivering. There is currently 18.6 million square feet of inventory, equal to 1.5% of the total Chicago industrial market, actively under construction—the third-highest amount on record for a given point in time. The accelerated demand for warehousing and logistics space created by the pandemic is in turn driving demand for new construction both by developers looking to build and tenants to seeking to move into new construction or complete build-to-suits. The current commodities shortage, soaring prices and long lead times are leaving many local developers to reconsider the scale and scope of their projects.

Chicago is facing a similar surge in pricing as is the nation overall, with commercial construction costs having increased 2.4% in the first quarter of 2021 and 4.3% over the past 12 months. During the first quarter, lumber prices had the largest jump, climbing 49.0%. The cost of steel also experienced a significant increase. Developers are dealing with steel pricing that has gone from around $7 per square foot to $11 per square foot, a nearly 60% increase. These pricing increases, in addition to Chicago’s already steadily rising industrial rental rates—which have increased 16.5% over the past five years—have some developers concerned about demand.

Over the past several years the Chicago industrial market has seen a flight to quality by tenants, with both new and expanding tenants such as Amazon, Ferrara, Medline Industries and Haribo largely preferring new construction. Currently, build-to-suit developments, which make up 8.6 million square feet of the 18.6 million square feet of active construction, are pushing forward, while some spec developments have halted construction. To accommodate the market volatility, developers are extending deadlines and bidding with shorter windows such as 45 days instead of six months. It is the 10.8 million square feet still set to break ground this year where the real impact likely will be seen. 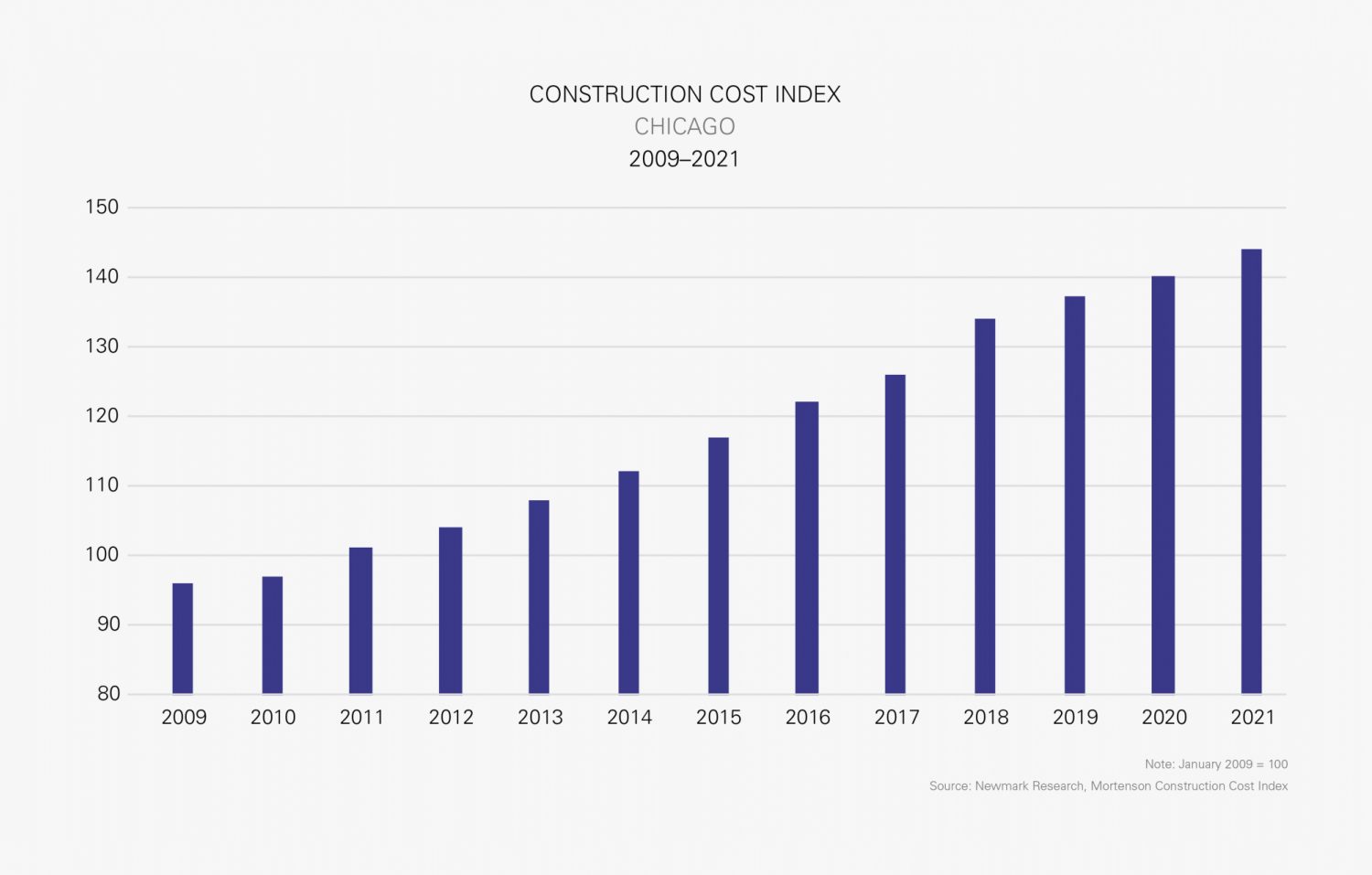 What Are the Implications for Our Clients?

A supply-demand imbalance within both the residential and commercial markets, coupled with pandemic-related material shortages, has led to a dramatic increase in pricing. Instability persists in the commodities market and continued upward pressure on pricing may give some developers pause, causing projects to be canceled or postponed. Other developers will likely need to increase their construction budgets to accommodate for higher material pricing, and in some cases budgets for projects that were established prior to the pandemic will need to be reassessed. With the cost to build reaching new heights and market fundamentals remaining favorable, industrial users will likely continue to face rising lease rates for new, modern distribution space. The growth of e-commerce, accelerated by the pandemic, is likely to support elevated levels of demand for industrial space in the years ahead, while other property types recover at disparate paces as the national economy improves.

While construction pricing may escalate further in the near term, supply chain issues and material shortages are expected to diminish as the global pandemic subsides. As a result, the pace at which construction prices have been rising is expected to wane. After their significant escalation, prices may decline toward the end of the year. With continued strength in demand-side fundamentals, particularly for industrial assets, the construction pipeline will likely remain robust.

The Office Construction Pipeline: Factors Shaping the Future of Development